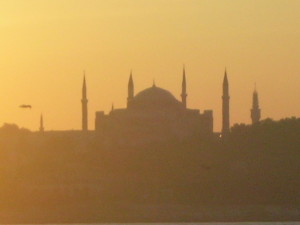 I have heard some Muslims espouse that they, and all “true” Muslims, are peaceful people, who abhor violence and therefore, by inference, the Islamic terrorists who foment it. If this is so, then why, in a religion with more than a billion and a half adherents in over 50 countries worldwide are there not legions of outraged followers who publicly loudly denounce the hijacking of their faith and the barbaric activities of radical Islamic terrorists who rally to the banner of 7th century violent Islam?

Let’s start with America. Why aren’t more Muslims organizing anti-terrorism rallies across our 50 states? Where is the Muslim community activist, igniting a firestorm of Muslim outrage against Islamic terrorism? Protests and marches for or against this and that take place in America regularly because of the freedoms we hold dear as Americans. Why wouldn’t peace loving, free Americans who happen to be followers of Islam be shouting out against the grotesque actions of their ill-willed brethren? This is a sincere question, not rhetorical.

There are two possible answers. The first, and the one that we must hope and believe is not true, is that all Muslims actually support the heinous violent activities of radical Islamic extremists. Therefore, there is no outrage expressed against the savagery.

The second possibility is that moderate, peace loving Muslims are afraid to speak out against the activities of their extreme violent brethren, fearing retribution. There is likely truth to this. Just as in neighborhoods infested by the Mafia in years past, people who knew of wrongdoing and bad things being done thought it prudent to just keep quiet about everything and not be labeled a trouble-maker, fearing for themselves and their families. Does this serve to solve the problem?

There is a third answer possible, and that is that there is an equal amount of apathy within the ninety percent of Muslims worldwide who are not considered extreme or radicalized. They are just living their lives. They do not consider themselves part of the problem, the radical ten-percent, so they simply ignore the issue and go about life.

History has recorded many examples of what happens when people choose to ignore the evil brewing in their midst, thinking that it will just go away.